Paul Chaney’s diagram presents in condensed form that which is difficult to imagine and not easily collapsed to the human scale. He asks the question: what is the concrete relationship between the Big Bang and the contemporary stalemated war in Ukraine? If we radically shift our point of view and attempt to see the realities of our lives within the context of the development of matter, and if we accept that the anthropocentric perception of history is not the master key to understanding seemingly local conflicts, then we have a chance of truly perceiving ourselves and our limited capacities as we move beyond the threshold of the Anthropocene epoch.

The exhibition space has become a laboratory. In the first part the audience can see an immense diagram, a graphic visualization of the transformation of matter throughout the deep history of the universe, and in its second part the author follows and weaves the complex threads of geological transformations in addressing their relation to the scaled down socio-economic reality of the human. The ongoing conflict in the Donbas region is thus contextualized as a product of the contingent interaction of slow geological processes and turbulent industrial development. At the end of this schema are presented, like the nerve endings of a dynamic system, concrete human beings who live and suffer. The project itself was started in Donetsk at a time before the military conflict. Due to the escalation of violence, however, it was cut short before completion. Tranzitdisplay thus becomes a laboratory of nomadic research which has not been completed. During the exhibition, Paul Chaney will be working on the part of the diagram which depicts those nerve endings inhabiting the reality of a lived present.

Donetsk The city of Donetsk was founded by John Hughes, a British citizen and self-taught engineer from MerthyrTydfil, South Wales. Hughes was commissioned by the Russian Tzar to start a massive ironworks in the frozen Ukrainian Steppe in 1869, an impetus arising from Russia’s military failure during the Crimean War (1853-56). The Tzar, realising that Russia’s technologies of war were far less advanced than those of his enemies, headhunted Hughes from London’s Millwall Docks where he owned a foundry specialising in the production of iron fortifications. Hughes raised the necessary capital in London to form ‘The New Russia Company’ and construct what quickly became the largest iron works in the Russian Empire. Hughes’ foundry in Donetsk was not only responsible for producing all manner of military hardware, but also the iron rails that soon spanned the Empire, rapidly enabling the belated wide-scale industrialisation and future military/industrial superpower status of Russia and subsequently the USSR.

Donetsk was developed upon a uniquely accelerated military industrial complex that has repeatedly led to its autodestruction throughout modern history – the city has been at war five times since 1917 as different forces sought control over its military/industrial assets. During the Soviet era Donetsk became a favourite city of Stalin, who regarded it as a pre-existing model for his program of deculturisation. Since the 1870’s, deterritorialised workers had been brought from all over Russia and conditioned into the mythologies of the productive hero worker. This made the population particularly vulnerable to the Soviet propaganda that followed. The compound legacy is a deep and lasting identity crisis. This fact has probably not gone unnoticed by the current Russian administration during its recent manipulations in the region.

After the breakup of the Soviet Union the heavy industries of the Donbas region were privatised and Donetsk was subjected to the worst kinds of corruption, violence, and gang warfare. The 1990’s are known locally as ‘The Donetsk Wars’, with thousands of public executions and gang warfare incidents fresh in the living memory of the younger generations. Out of this chaos the Donbas oligarchy arose, who then legitimised their corrupt and violent medievalist style of ultra-capitalism by forming the Party of the Regions, placing at their head a former bus mechanic and gang leader from Donetsk – Victor Yanukovych. The 2014 Ukrainian ‘Revolution of Dignity’ against the corrupt political oligarchy and the subsequent eruption of war in the Donbas are on some level direct consequences of a geologic reality.

Diagram The work itself consists of a series of drawings, historical research materials, and installation plans describing an attempt to diagrammatise the sociological, geo-political, and geo-philosophical factors underlying the dramatic rise of the industrial city of Donetsk and its repeated rupture into violence. The diagram has two sections, the first of which aims to describe the city solely as a continuum of materials formed by stellar nucleosynthesis during the early stages of the universe’s expansion. Each element necessary for the commercial production of iron is visually represented; iron, carbon, oxygen, hydrogen, nitrogen, calcium etc. The founding of the elements, their reactions with each other during the unfolding formation of the universe, the formation of the Solar System, the Earth, Earth’s oceans, formation of the atmosphere and biosphere are described by the way in which the coloured lines representing each element in the diagram join, divide and change in proportion to each other. The first section of the diagram is one hundred and thirty six meters long – each centimeter represents one million years of time. Human civilization makes its appearance in the last 0.1mm.

The second section necessarily changes scale and attempts to position the agency of various human individuals in the context of a universal geologic contingency, describing the effect historical figures and political events have had on the rate of extraction of raw materials from underneath the city. The work simultaneously reveals the complexity and impoverishment of geo-philosophical analysis – and visualizes an unimaginable chronos in a way that begins to critique the notion of the Anthropocene. The work also mounts a challenge within the genre of the site specific by asking the question – if we accept the concept of universal contingency, just where does the site end?

Research Paul Chaney began developing the work with local research partners during repeated visits to Donetsk between 2012 to 2014. The work was to be installed in time for the 2015 celebrations planned for the birthday of John Hughes. The diagram itself was designed for a specific building on the territory of Izolyatsia in Donetsk. However, Izolyatsia was occupied in June 2014 by the forces of the Donetsk People’s Republic. The DPR continue to use the art centre as a training camp, weapons storage facility, and military prison. The rooms that were set aside for Donetsk Syndrome

Diagrammatic have been used for torture and executions without trial – by testimony of recently released prisoners. Research for the work was abandoned temporarily when the war began. However, the work quickly took on a specific cadence – the very socio-political elements that the work was attempting to reveal and speculatively contextualise were now acting as agents upon the work itself. Donetsk Syndrome Diagrammatic will probably never be installed in its intended site, as it has fallen prey to its local conditions and became ‘non-sited’. 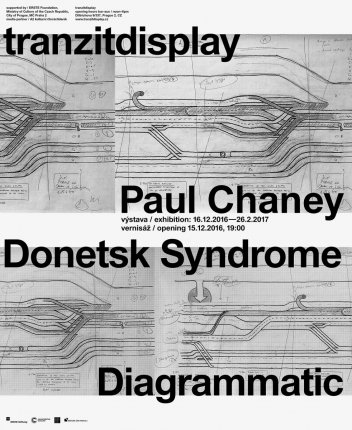